I write this as Chops is hunting the house for things to try and stick on the sticky stuff (contact paper stuck to the window with sellotape). “oh sticky stuff, oh sticky stuff, what will we stick to you next”… Read more ›

Our little tubie had everything we had tonight, chicken, mushroom, chicken stock and two noodles all whizzed up with breastmilk in our new replacement hand blender (this Kenwood one, pretty impressed on first impressions!). She also had bonus lunch of… Read more ›

I get the feeling we might start having more smoothies for breakfast in this house 🙂 W is having banana and yoghurt mixed with breastmilk and we’re having banana smoothies. She seems to be falling into a trend of one… Read more ›

Tonight’s dinner is slow-cooked chicken with carrot, fennel, swede and leek, W had a slice of carrot and a bit of fennel in a tablespoon of the chicken stock blended with mummy milk. W was weighed today and she hasn’t… Read more ›

Weaning a Tubie onto a Blended Diet Week 1 : Salmon, Watercress and Swede

Tonight’s blend is salmon, watercress and the other half of last night’s swede. 1tsp ish lump of cooked salmon fillet with a small sprig of watercress and around half a teaspoon of mashed swede whizzed up in Mummy milk. No… Read more ›

Weaning a Tubie onto a Blended Diet Week 1 : Porridge

1tsp porridge made with cows milk, blended with 50ml expressed breastmilk. Went down W’s tube nice and easily until the last 5ml which was the bits that were too thick to go down, it seems. Had a few blockage moments… Read more › 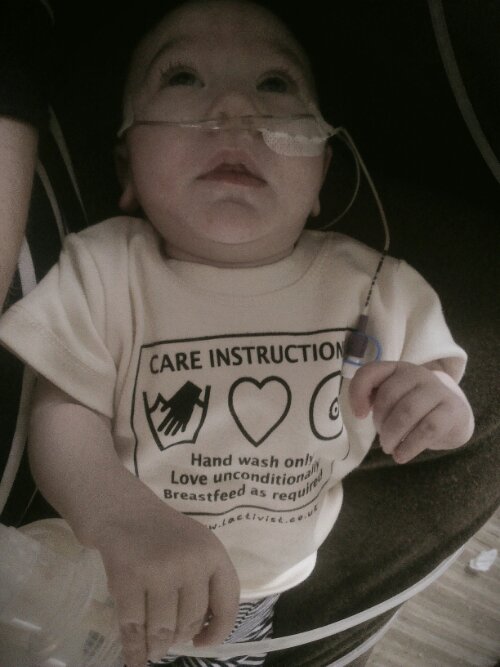 I bought Wriggles this t-shirt (from lactivist) while I was pregnant, it was one of only a handful of things we bought for her and I loved it, it says everything. At that time she was a normal healthy little… Read more ›

First food down the tube

A momentous day in our household, Wriggles has just had her first solid food! We all had mango & banana smoothies for breakfast, W included 😀 I whizzed up the mango and banana with a bit of yoghurt and took… Read more ›

Which Blender for a Tubefed Blended Diet?

So Wriggles is definitely going to be on a blended diet, decided. Before we begin though, we need to buy a super-whizzy high-powered blender to whizz up all her food! There are a few obvious choices in the Vitamix and… Read more ›

Today was brought to us by the letter D. D for den, d for duvet den, d for dinosaur t-shirt, snacking on dates and playing the drums! D is also for diggers! We made this sand pit using cornmeal, adding… Read more ›