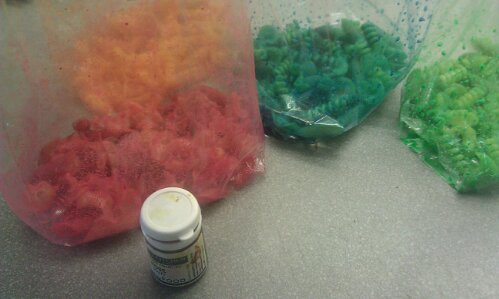 We tried rainbow rice, Chops just wanted to eat it or dump it all on the floor, now I thought we’d try some rainbow pasta!

Making it is SO easy, just put some dried pasta (different shapes if you have them, to add some variety) into a plastic food baggy, add a teaspoon of vinegar and a good few drops of food colouring and mix it all up. Spread the pasta out into a single layer (still in the bag if you don’t want to get a tray messy) and let it dry.

By fluke I discovered that adding paste food colouring to the vinegar and mixing that well before adding to the pasta was much better and I didn’t end up adding too much liquid like I did the blue, which resulted in soggy pasta bits!

I had intended this to be our first Montessori-inspired sorting game with tongs and pots to sort them into but the shapes I used were too tricky to pick up with the kitchen tongs!