Since Willow got her Jenx Bee chair a fortnight ago, I’ve been battling with a feeling I can only compare to guilt, though not guilt. I want W to have the best chance possible at independence, I want to raise her as close as I’m raising our neurotypical (new word for me, like it!) son, but in many ways that isn’t possible. 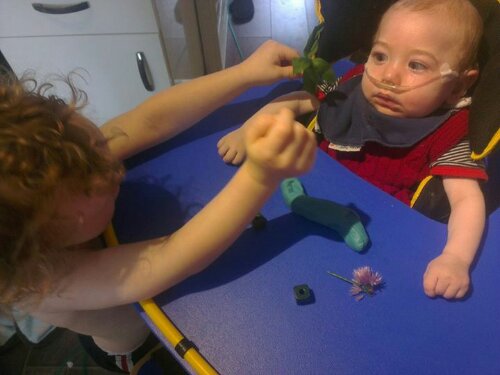 I carried Chops in a sling for 20 months, he was on my back and hip from about W’s age, then mostly on my back until I was around 6 months pregnant with Wriggles (and in the odd occasion after that). I kept him close, knowing that was the best way to raise an independent child, to help them become firmly attached and secure.

I thought my feelings about W being in a chair were about this, she’s very much like a newborn still in so many ways, but I have to remember she’s 10 months old. I talked it over with good friends who also babywear, I was, I thought, at peace with her spending time in a chair, my dilemma felt all about making sure I was doing the best by her. Mainstream parents would think nothing of sitting their child in a chair with things to play with but it’s not something I ever wanted to do with Chops, never mind W, he had a Baby Einstein chair thing that he could turn and do different things but he would go in it for 10 minutes max while I did bits of dinner that was too difficult with him in the sling, we called it a ‘plonker’ so this is alien to us.

Others suggested my feelings were about this chair being our first piece of adapted furniture in our house. Could be, I thought, but I really do embrace it, we asked for it, I’d been excited about it, about being able to do sensory play more easily with her.

At around 4am while pumping milk, I had a bit of a realisation.

Not long after W came home from hospital we went for a trip to a garden centre that have animals and a park and things, for lunch. We were aware by then that Willow was highly likely to have cerebral palsy, that she was going to be severely disabled. As we drove into the car park a disability car had just parked and a middle-aged lady was unloading a wheelchair, we noticed a suction on the back, I was glued (while trying not to stare, as you do), a young girl got into the chair, she was perhaps in her mid-teens.

I know it was early days because I remember looking at this girl, and we talked about it after, and thinking my goodness that could be our girl in 13 years time. My word, when I think of that girl now, sitting up, untwisted in her posture, ‘normal’ looking except for the equipment, I wish W could be so lucky, to get to her age at all would be amazing.

But then I remember what upset me so much about that young girl. She was put at the end of a long table, not even seated at the table but alongside, her carer didn’t talk to her the entire time they were there. I forgot to mention, I really did stalk her, I positioned myself in the cafe so I could watch her from afar, engineering us onto a nearby table nonchalantly (or probably not in reality). She was left, ignored, nobody interacting with her, I wanted to go and talk to her. I didn’t, I sat there and
I swore that day that that would never happen to my girl, she would never sit and stare into space, nobody talking to her, nobody listening to her, interacting with her.

And there we have it. I’m scared. I’m scared of ignoring her, I’m scared of her feeling alone. That feeling isn’t guilt, it’s fear. When she’s in arms she’s not alone, but when she sits in her chair, she is. Despite having a whole host of activity in front of her on her tray, she mostly stares into space.

So having clinched it, I can deal with it and move on. She will never be ignored but that doesn’t mean she needs to be attached to me permanently for the rest of her life, so today there was more play in her chair. There is no doubt it is difficult to play with a little girl who doesn’t play back, but now and again she feels an object and beams, all is suddenly worth it. 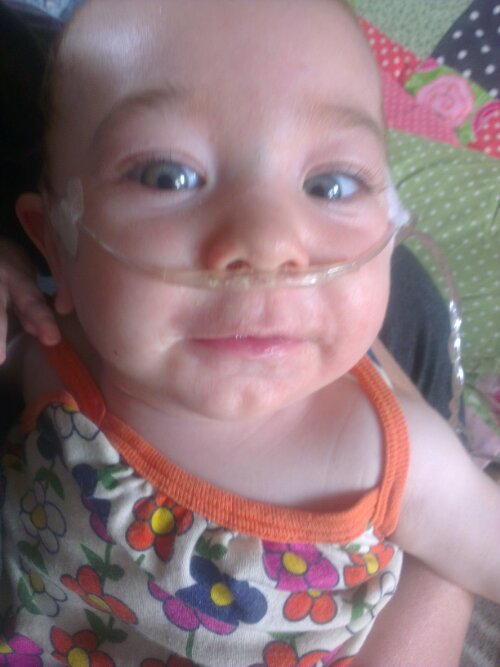