I can’t believe I’m doing this. I’m sitting next to my 5 year old’s bed as she struggles with secretions in her sleep, waking so regularly that there’s no point in me going to bed.

This isn’t usual, this is because we’re trying to tubefeed her a “complete food” via pump, designed for enteral feeding children, just so that she can go to school for more than 2.5 hours because school won’t feed her real food via her tube. Not even bloody oat milk.

You see, until recently, she happily slept mostly through the night most nights, she went to school for full days, in fact she’s in Year 1 and until we moved to Staffordshire in September, she’d been happily in full time education since the start of reception.

But, you see, Miss W doesn’t have formula feeds like the dieticians and feeding companies who supply food and tubefeeding equipment to tubies want tubefed children to have, she has a blended diet, real food blended, for over a year her school in Hampshire blended her school dinner and fed it to her via syringe in the same way we do at home and have done since we started ‘introducing solids’ at around 7 months old to supplement her expressed breast milk.

However, despite us asking the Head on visiting the school we thought she would go to up here, if they would do blended diet and being told it shouldn’t be a problem, on arrival we were asked to meet with the nursing team and told absolutely not, Staffordshire do not have a policy for tubefeeding a blended diet, if she was to be fed at school then it had to be a prescription food.

But, I protested, she comes with her own risk assessment for giving blended diet, her own feeding regime, she’s a 5 year old girl who needs proper food, good nutrition is vital to her. We agree, they say, but our hands are tied, we don’t have a policy in place to do that within Staffordshire, with the North Birmingham NHS Trust, we’d love to help but we can’t. I felt like I’d entered another time zone.

I got hold of NHS feeding policies for blended diet from other NHS Trusts, I sent them to the head of school nursing for special schools in Staffordshire, who had told me she should be my contact with all things blended diet, I didn’t even get a courtesy reply. I was simply told to make an official complaint. That’s it.

We agreed she would go to school for mornings only, I’d drop her off at 9.10am and pick her up at 11.30am. I could go in to feed her but given I have another child who is being home educated and whose anxiety goes through the roof in special schools for some reason, that simply isn’t a viable option, it’s already hard on him that we have to get in the van and drive to her school and back twice in the space of that 2.5 hours. It’s a good job we’re renting a house only a few miles from the school, which we’re paying a lot more than we’d like to to be close by, because it didn’t seem like there would be an issue with her going to the school and nobody saw fit to let us know before we moved that it was going to be a problem, no they thought they’d wait until a few weeks after we’d moved up!

Fast forward 2/3 months and here I am sitting next to my little girls bed watching her writhing in discomfort every 10 minutes as I pump this vile concoction into her as slowly as we can, in the hope that if she can tolerate it then she can have it pumped in slowly through the school day, even if it’s only once a week so that she can do a full day at school and so that Chops can have a full day of home ed without his sister taking my attention.

As Mr T said, it’s rubbish but it’s less rubbish than her not being able to go to school. 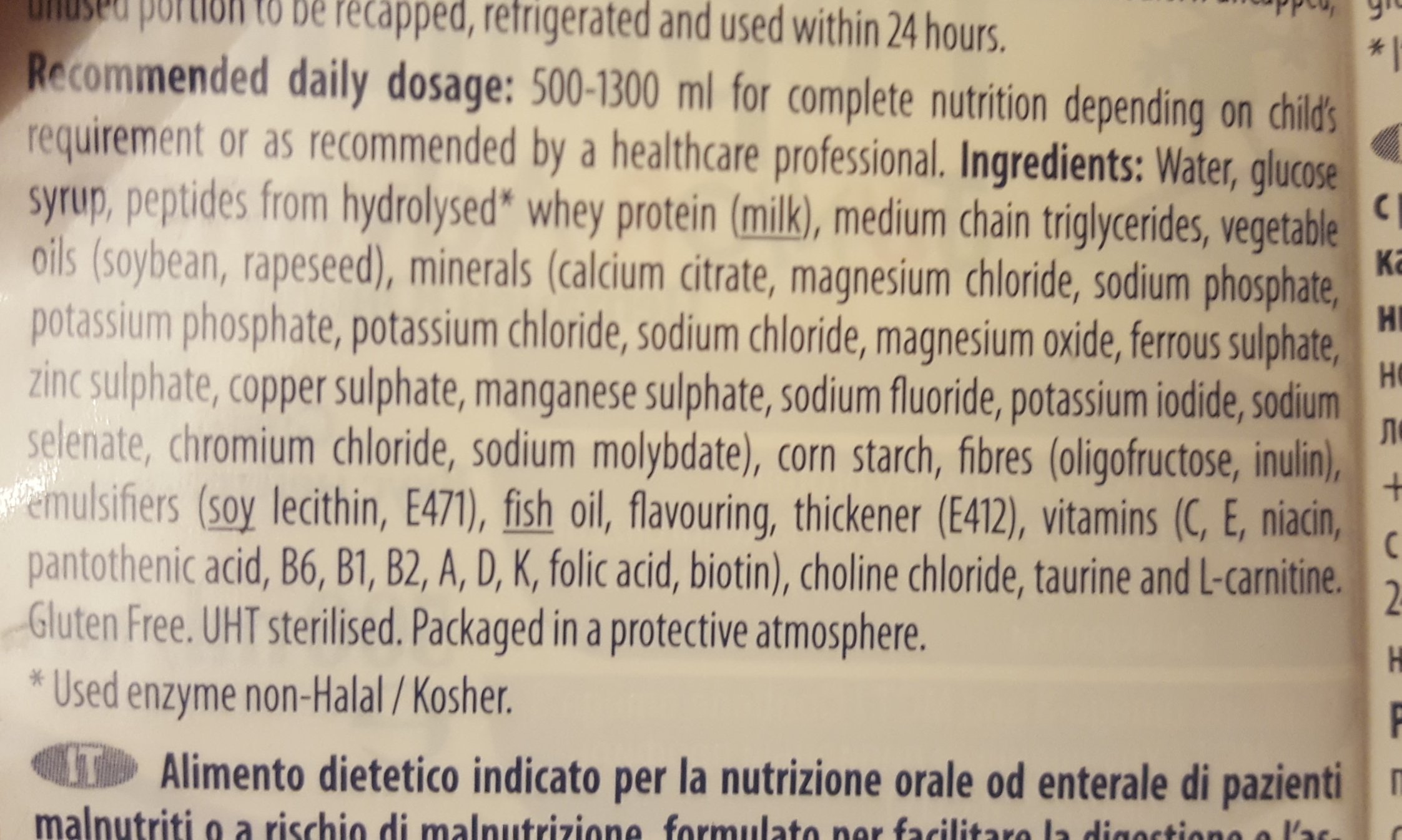 We’re now looking at moving out of the county and giving him a bigger commute so that she can be fed real food at school. They won’t even let me send food in as a packed lunch, I mean hell, they don’t know what’s in it!!! Do they know what’s in every sandwich in every lunch box in every school in Staffordshire? Why should my child be any different because she’s tubefed? I do much to ensure my children have a varied healthy diet and avoid too much sugar and here the recommendation from the health professionals is to abandon her healthy and nutricious food and give this stuff, half is glucose syrup but it does have her daily requirements of all the minerals and vitamins she needs. Oh, yes, from your food diary we can see that you meet pretty much all of her daily recommended vitamins and minerals, bit low on zinc (extra spinach and some Brazil nuts will do) but that changes every day because SHE HAS SUCH A VARIED DIET, so how do we know she’s meeting her requirements all the time? We would very much like it if she was having a complete feed every day in addition to her Blended diet, then at least we’ve covered all bases. You couldn’t write it, well I am!

Well, I was pumping it in, I’ve just stopped it, I can’t do it to her any more. We’re only on night 2, last night she made it to 117ml of this stuff, pumped in at 27mls per hour before I decided, around 2.30am, that restful sleep was more important for both of us and I’d suctioned her for the third time.

Tonight we diluted it with water but it seems that as soon as it starts going in, she starts refluxing, coughing and spluttering her excess secretions.

There has to be another way, how is a foodstuff where the second ingredient after water is glucose syrup possibly good nutrition? But it’s what dieticians recommend, even the good ones!! This is seen as more appropriate than a nutricious balanced diet!

Why is my child treated worse than an animal in terms of nutrition, because she’s tubefed and has no voice to tell me how it makes her feel? Rat food came up in our search of what the ingredients were for this feed and it sounded 100 times more preferable. Mr T and I are her advocates. She gets a very balanced diet every day, she has beautiful skin, her digestive system works very well, she rarely gets ill other than chest infections from secretions. Nutrition is vital to her.

But we have nowhere to turn. We will find a house out of county, we will move, but until then, what?

I’m certain that this is disability discrimination, I can only imagine the stink that would be caused if a non-disabled child were to be told they could only go to school if they had this artificial food, made up mostly of water and sugar, with added vitamins and minerals and whey protein, corn starch and other thickeners added for good measure. Phew, there’d be an outcry!

It’s clear her body is rejecting this stuff, can’t say I blame it, I think mine would too!

I’ve made her up some almond milk, she continued her writhing for about half an hour then sleep beautifully until 6am.